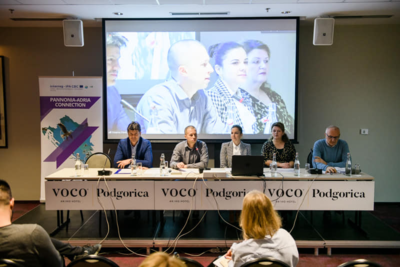 This was announced at the final conference "Pannonian-Adriatic connection" PA.CON, which was organized by the Center for the Protection and Study of Birds (CZIP) within the framework of the mentioned project.

The representative of CZIP, Zoran Popović, said that a regional thematic route was created as part of the project. Acquired thematic equipment – 20 binoculars, one binocular, one set of photo equipment. The visitor centers in Virpazar and Vranjina will be equipped with binoculars that can be used by tourists interested in the ornithofauna of Lake Skadar.

"In the area of Skadar Lake, four tourist maps will be placed, as well as seven solar benches. As part of the project, a solar-powered boat was also acquired, which will enable visitors to cruise the lake without noise, vibrations and emissions of harmful gases. In this way, the sustainable and environmentally friendly organization of birdwatching tours and cruises in general will be promoted," said Popović.

In addition to the procurement of equipment, CZIP also organized specialized training for quality assurance in connection with bird watching in Montenegro, as well as joint cross-border education on the topic "Bird watching as a potential factor in the development of tourism".

Director of the National Parks of Montenegro (NPCG), Vladimir Martinović, said that the project was of great benefit to the company.

"I would like to remind you that about 280,000 euros have been invested in this project to improve the tourist infrastructure of Skadar Lake NP. In addition to the adaptation of the interior of the center in Virpazar, as part of the project, we carried out the activities of renovating the roof of the Administration Building in Vranjina, the bird-watching observatory on Stanaj, the construction of a new bird-watching observatory on Raduš, a pelican nesting platform, a 3D I LOVE Skadar Lake sign, bicycle signaling on the Virpazar-Ckla track and the reconstruction of the pedestrian path in Virpazar", said Martinović.

As it was added, the process of purchasing electric bicycles, solar stations for charging them, and the creation of bird sculptures, which will certainly enrich the Visitor Center in Virpazar, is underway.

"We believe that all these activities have significantly contributed to the improvement of the Skadar Lake NP offer, which I'm sure we will feel in the coming period," said Martinović.

The representative of Nijemci Municipality, Antonela Klisović, said that as part of the project, 150 representatives of the target groups were trained in quality assurance, digital marketing and destination management.

She pointed out that three natural assets in the area of Nijemac, Tuzla and Lake Skadar have been improved and made available to visitors.

"As part of the project activities, we created a 44-kilometer "Forests of Srijem" cycling route. At each of the points there are benches, baskets, maps with carved birds, tourist maps, staplers and spirals for storing bicycles, and at two points there is a service stand for repairing bicycles. In addition to the above, a wooden storage room for ten electric and ten ordinary bicycles was installed, as well as a solar charging station for electric bicycles", stated Klisović.

She explained that the Municipality of Nijemci also built the arched pedestrian-bicycle bridge over the Bosut River, which connected the Sopotac Resort with the Spačvan Forest.

"This bridge is also important for our bicycle route, and for the Municipality of Nijemci, the bridge is the biggest investment in the infrastructure of this project," said Klisović.

The representative of the City of Tuzla, Eldar Hrnčić, said that as part of the project, a bicycle-educational path was created, as well as touristic signage and promotional panels on Ilinčica in Tuzla.

"Also, as part of the project, we acquired thematic equipment for the "Home of Nature" in Ilinčica and furniture for the interior. We also arranged three plateaus for rest, connecting the plateau to the bicycle path at the Ilinčica excursion site in Tuzla, and we procured and installed furniture at 16 micro locations for picnics and recreation," said Hrnčić.

The representative of the NERDA Development Association, Amira Kavgić, said, speaking about the renovation of the tourist facilities of the Ilinčica excursion site, that informative and educational boards were installed, and bicycles were purchased for mountain riding, as part of the additional contents of the bicycle-educational route.

The representative of NPCG, Hajdana Ilić Božović, said that in order to improve the tourist offer, the project included the improvement of the Virpazar-Ckla bicycle path, which runs along the southern shore of Lake Skadar, and is part of the EuroVelo 8 path.

"Upgrading implies installation of vertical bicycle signaling. The project also provides for the purchase of ten electric bicycles and a solar station for charging them. The procedure is ongoing," said Ilić Božović.

As she added, the restoration of the pedestrian path in Virpazar was carried out as part of the project.

"The project involved the adaptation of the interior of the Visitor Center in Virpazar. Except
0 0